Legacy Jewelry
20 Aug, 2014 stained glass jewelry
Apologies for the blur I had a go at making stained-glass jewelry in November last year. It wasn’t entirely successful – I hadn’t appreciated the ones I’d seen were silver rather than eutectic solder, which is what this is made with. Eutectic solder does look nicer, but it’s obviously not the right stuff. Additionally I think if I used a soldering iron with a temperature-controlled tip (as I do on my electronics) I could probably make the solder itself look nicer. 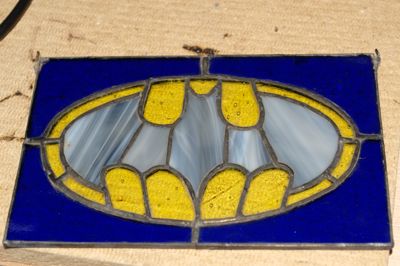 A friend’s birthday came up, waay back in 2012, and I made him a small batman logo. Actually too small, this is A5 sized and was difficult to get the detail in. I added hooks at the top corners to hang it but as a piece of art it’s a bit difficult to put somewhere. Happily its colours are strong enough that it doesn’t require light behind it to work. Still took about a day though. I think this was when I discovered they don’t joke about the warnings on the bottles in this hobby and the patina wash I’d got over my now painful hands was nitric acid!


Well who doesn’t want a Weighted Companion Cube? I realise it’s not the most innovative design but it’s nice and simple, and I like the fact that it hangs over my head. It also goes with my Aperture Science logo. 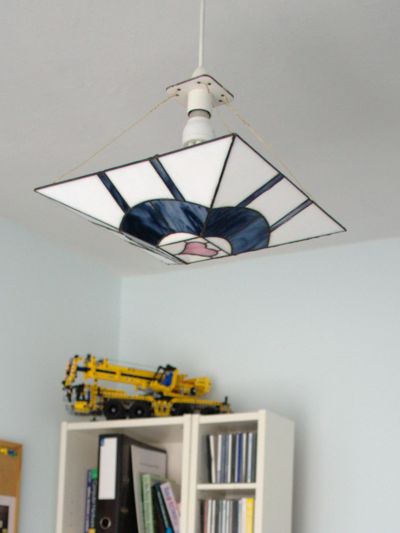 This took a surprisingly long time to make, as I started this in March 2014 and only finished it in August. However this was mainly due to not actually working on it in April-July as I couldn’t decide exactly how I was going to attach the lampshade to the pendant once I’d made it, which demotivated me slightly.

I made this back in 2012 and never wrote it up. Mind you, I’m still in two minds as to whether it works well. If you know it’s an Aperture Science logo it looks like one, but I think otherwise it just looks like a camera iris / aperture / spiral thing. Since making this I bought some mirrored glass which might have been better in the middle, as actually I don’t really open the curtains too much – it lets out heat in winter, and lets in sun on my monitor in summer! A mirrored centre would allow me to hang it on a wall. Maybe I’ll look for some adhering foil backing…