Last time in Illmire, the Ranger Leithidir turned out to be cursed by the Deathly Spade. If only Yorivar, Illmire’s druid, was still around! Leithidir would also still like to replace his hand, he’s only been able to find a wooden one.

After a lot of arguing, the party choose a route that involves going through as much forest as possible, to utilise the Ranger’s favoured terrain. This goes well until the edge of the lake, where a Giant Crocodile 🐊 attacks them while fording a river. This ambush is super effective!

AAR: Fake news of Illmire
8 Aug, 2021 evils of illmire 5e fvtt
I’ve got terrible at keeping up with these. Let’s try to sort that out! The players leave the surrounds of Illmire and get supplies, and more importantly recruits to reinforce Illmire. They travelled out on the King’s Highway, and got torrentially rained on. I like AiME and so a good excuse to make this journey a Journey with Exhaustion and suffering1 is one that’s been missing for me up until now.

AAR: The cult of Illmire
27 Apr, 2021 evils of illmire 5e fvtt
So last time, the players decided to sneak into the cult’s temple in Illmire. Coincidentally they managed to knock out the window to the only room without cultists inside it. This session started with a happy murder of all the cultists desecrating the temple that didn’t surrender in time. Most notably the ranger found a sacred mace, that he very carefully didn’t touch with his skin and passed back to the cleric for safe-keeping.

AAR: The Terrors of Illmire
25 Mar, 2021 evils of illmire 5e fvtt
We continue the tales of the Evils of Illmire. And what I’ve learned while running it. The party start in the sunken Bastion, keeping a Black Skeleton Turned at bay while they rob his throne room. They then have a short rest, and explore the room unlocked by the key on the Skeleton’s belt. Some normal skeletons provide no trouble, but the Wraith they unleash from the cell is much more of a problem, especially when it starts raising the freshly interred skeletons as Spectres.


So, last time, in the Evils of Illmire… well, it went a bit to shit. See for yourself.

Rancidius, priest of the Cult of the Illuminal Star, and the bandits defer to him. He knocks Vert, the paladin, to the ground, and then pulls a mindphage from his ear.

Useless thing, so much for control. You were supposed to have betrayed the party much earlier! Not that I suppose you needed to, you’ve been much less competent than I expected!

The monologing continued in this vein for some time. Once “Father Rand” got this out of his system, he dispatched the group to the cult HQ for sacrifice to the Fearmother. However, en route, the cult see mantismen causing problems ahead, and resolve to tip the party into the Gecko Pit and call it quits.

But they’re keeping the loot, of course.


In the last writeup, the party was surprised by an owlbear…

But before that, I got the party sketched! This was done by HodagRPG, see their zines on itch.

Clockwise from the top right, we have:

I really like the sketches, so do my players. It was about the cost of a round of beer, and in Feb 2021, that is an option I do not have. 🍻


Continuing from part one, this post summarises the next two sessions. The party decide they want to investigate the bandit camp (shown by the tower in the map below).

This of course is Just Great as I’d prepped the temple because they were very keen to go back last session. I had the map in FVTT though with some walls on it, so it was more-or-less ready to go. I just didn’t have NPCs, encounters etc ready.


Apologies for the delay on this writeup, it’s back from October. The Barrowmaze campaign continued on a little longer, but then fizzled out to be replaced by the Evils of Illmire one in December.

I realised I had too many small RPG groups. I know why this is, I like small groups of people in person - I’d much rather go out with three people than eight. The problem though is with a party of eight, it matters a lot less if someone can’t make it.


Time to start The Evils of Illmire!

I got this via its kickstarter earlier this year as it looked nice, and more importantly, it was cheap for digital. It’s the sign of a good one that I wish I had it in print as well now! Handily, it also has a D&D 5th Edition conversion, that came a little later than the main booklet.

It is a sandbox set around the town of Illmire. As the title hints, shenanigans are afoot…

Now unfortunately, I have not found a good way of actually setting a creepy tone over the Internet. I normally use something like Dread or Ten Candles to do that for me, but both are very physical games. The former uses an actual Jenga™️ tower and the latter uses ten actual candles as your strength against the metaphorical as well as physical darkness.

Well, COVID has fucked that. 😷

So, instead, here’s the next best thing, a pumpkin-themed 1st-level one-shot. As usual all arts and assets are from 2 minute tabletop. Ironically not the adventure they’ve published this year, 2020, but from a few years back (I think). 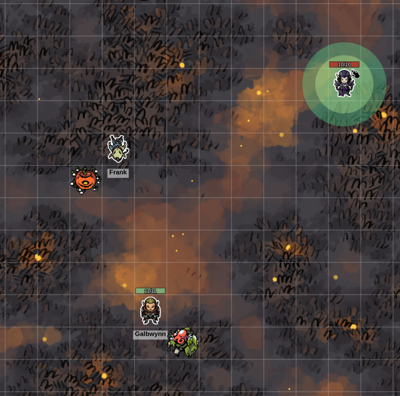 Pumpkins because of course.


BEHOLD! Marvel at the majesty of the Barrowmaze! Gaze in awe at its breadth, its depth! It has hundreds of rooms, leaving years of material to play in!!!

The party triggered a trap in room 2, and died, fleeing, in room 1. As a GM, not my finest hour. Again. This is the same group that I killed before!


I wanted to try a 5e game but with OSR rules for dungeoneering. For that, I used Considering Bees from AAW which I had in print with VTT assets from their Kickstarter in 2019. This is a level 2 adventure, and pits the players vs, well, bees. 🐝 🐝 🐝

This took two sessions of about 2.5 hours each, and had two PCs each running a single character. We played in roll20. I tried to set up proper dynamic lighting (the new style) but cocked it up reasonably-well so defaulted back to the old version (was showing the whole map to the players). Perhaps next time I’d just buy it on roll20?


Finally, FINALLY, ran Tomb of the Serpent Kings. It is rightly held up as a great intro dungeon, for teaching lessons (in a good way) about some OSR concepts to beginner players. We’re talking here about combat-as-war rather than combat-as-sport, and the general idea of “don’t assume your GM is keeping you alive”.

The players I ran this for wanted to play in Fifth Edition, and as I’d chosen the RPG for our last game, I used a free conversion pamphlet.