This is an actual line from the video game of ‘Vampire: the Masquerade’. It has always stuck with me as an ARPG that wasn’t that bad, but with some cracking voice acting.

So for Grant Howitt to make one of his monthly one-page games actually called STONE THE CROWS, and then actually have to raid the bleedin' Tower of London - well, I was sold pretty quickly.

Also it’s based on Guy Richie’s ouevre of Cockney gangster films, which is certainly a fresh change from eurofantasy or scifi, where I typically end up.

And finally, I bought FoundryVTT to move from roll20 and self-host. Helps get my nerd-cred up, I’ve always wanted to run a NodeJS server. So a nice light game to start with, why not?

Here’s the entire rules. Encounter resolution is through a deck of cards, players have a small hand to beat cards drawn by the GM (although the GM doesn’t have any tactics beyond deciding whether an encounter is warranted).

I had five players gracefully volunteer from Alone in the Labyrinth’s Discord, and four of them were able to make it on the night. They played:

The game lasted about 3 hours, including a half-hour warm up “who’s actually seen some Guy Ritchie films” and quite a lot of groans from terrible jokes.

Our band of minor tea-leaves have been doing crimes where they shouldn’t, and the last lot of gear they half-inched only turned out to belong to Big Vic. Big Vic is a crow who runs the East Side, and is not the sort of corvid you want to cross, even by accident.

He summons them and tells them to get him a silver plate from the Jewel House by 11pm tonight or they’re brown bread. Polite questioning from Mo is returned with the offer of a slap. They are summarily ejected from Big Vic’s establishment, and our players wonder how to break in to the Tower.

The features of the Tower are discussed (the rules have some suggestions for hazards that some players had already read), and some suggestions put forth. I reminded the players that they are birds and can fly, they just can’t fly out with tomfoolery (🤫) weighing up to a couple of kilos.

Rory eventually (bless him, he’s not smart) remembers he has an uncle, Reggie Raven, who is a guest of Her Majesty’s Ravenmaster just south of the White Tower. I decided this had to be the full Noël Coward affair with Reggie controlling things from his ‘cell’. For his favourite nephew, he agrees to arrange a window to be left open, he knows a guard with a nasal problem. He asks for a single spoon in return.

In addition he suggests that getting out will be harder than getting in, and maybe seeing Bjarne, king of the (Norwegian) rats operating from Brass Mount would be able to help. The “experienced” players promptly split the party for “reasons” and Mo and Caróg drop into a gutter to see the King Rat.

A Jabba-the-Hutt experience plays out and the birds must fight a rat to prove their mettle. Mo however blinds the rat before the fight even starts. Bjarne is impressed, and his interpreter summons Benji-mouse to go with them to summon the rodent cavalry when transport is needed. Along with another item for their shopping list and the promise of a cheesey Quaver (favour) in return.

Meanwhile, Jack coaches Rory in staying out of trouble, but is undermined by some pigeons (Ritchie-stock junkies) harrassing them for oily rags (fags). Rory pecks at one and then dives another out of the tree they were in. They then steal a phone (totally within corvid capability) and try to look for pictures of inside Jewel House on the phone (a bit harder).

They then have a quick rest before the caper: 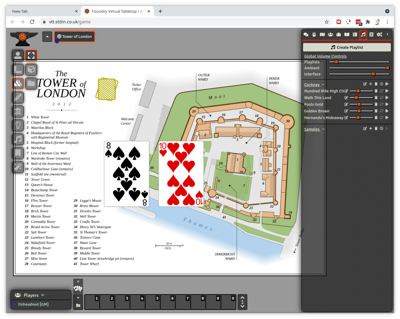 That’s a bit of awlwoight, that is

Finally, they go in. Caróg sets up his bomb as a distraction, and they enter via the open window. Inside, a broom cupbard. After listening carefully they sneak around upstairs, until they find the Vault which has a massive door and a keypad.

It’s a very hard challenge to spot which buttons are worn from use, but the gang succeed, and have a Ode to Joy moment when they finally get in. They fill up the mop bucket from the broom cupboard with loot, take it back, and throw it out the window “carefully”. They leave Benji to guard it while they go back for more…

Yeah, not such a good idea.

On their second trip, a yeoman warder attacks with a loaded SA-80. The quick-thinking corvids throw some jewels to get him to dive to save the precious stuff, and ditch the rest to return to the broom cupboard, to find: nothing! Benji has betrayed them, the dirty rat (this was not my joke).

Caróg detonates his bomb with the hope of at least concussing the dispersing vermin carrying away their loot. This is successful and two birds can grab a plate while the others get spoons. Handling the plate down the cobbled streets away from the blaze is hard though, and rats approach!

A few quick encounters (it was late by now) and the team safely get back to Big Vic who gracefully accepts his plate, and grudgingly accepts the others are for Reggie, whom he does not want to offend. We fade out with Posh and Scary presenting a Sovereign’s Ring they nicked from a rat to repay their favour to Jack Daw.

I like Foundry, although setting it up takes a while. You need to like fiddling with things.

For example, it supports continuously looping playlists for ambient music, as well as a soundboard feature for playing effects.

“I don’t care who you use, as long as they’re not complete muppets”

To set the scene, I uploaded some of my favourite tracks from the Lock/Stock and Snatch soundtracks as I own them on CD. I also used some of the spoken clips from that at appopriate points. I’m not sure how much difference it made, but it got some grins. Still probably spent about as long on this as the characters to move around the environs of the Tower.

The card deck isn’t quite so intuitive, it appears as a tile in the map. Players have no permissions at all on the map, so they can only see cards that the GM manipulates. Instead they get a card menu, allowing them to interact with the deck and discard pile: drawing to their hand, peeking (if they have permission) or handing cards to each other. Once they drop a card on the table they can’t move it.

It was “good enough” but not as good as roll20, I wouldn’t have said.

The actual mechanic of the game itself (as there’s only really one) is similarly “okay”. I would not want to play too-serious a game of this. I had given players a quick downtime excuse to top up their cards, and they finished with three left each, having had no stress about how to meet any of the encounters.

However, if we’d had a few more, it would have suddenly changed rapidly:

It doesn’t leave much option for turning things around, apart from literally the luck of the draw of a final card perhaps.

I enjoyed this for some mindless fun, but I don’t know how I’d make this “a bit more difficult” without accidentally making it “far too difficult”. I think I’d probably use the Honey Heist mechanics and this theme instead.

I missed out “casual racism” when presenting, or for that matter sexism and homophobia at the “just joking” level. Those are also Ritchie trademarks, and while there was implicit (or perhaps complicit!) agreement we were dipping into those, perhaps we should have had a more explicit conversation too.

We were talking primarily about the films:

And other gangster films: