I played the ENNie award-winning Thousand Year Old Vampire. The story is that you’re a Vampire that can live for Thousands of Years. This game is the Ronseal (™️) of RPGs in that sense. Consider it Highlander, the RPG.

TL;DR It is great.

This is another solo epistolary game, similar to Artefact which I also enjoyed. Basically it’s creative writing with some rules. The rules are roughly:

You not only drink their blood but financially profit from your victims as well! How do you arrange this? What atrocity do you commit to protect this system? Check a Skill, create a Resource. 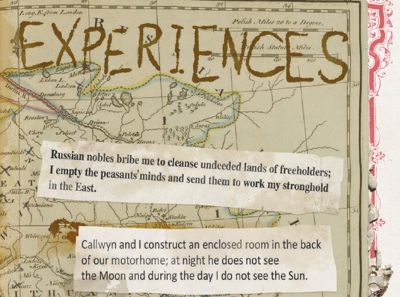 Some example experiences from the book

As usual, the point here isn’t to review the book, but just to explain my notes to myself for others. However, the original book is beautiful, buy it from Tim directly, or if you’re not in the USA, you need to find an importer or pay a lot of money for postage. In the UK I got mine through 3rd Space Gaming but I don’t know if they’re going to continue stocking it.

The alternative is buying the print-on-demand version. I haven’t seen that one, I can imagine it’s honestly a bit clearer to read, the book is printed as pictures of a collection of scraps to show its age and rich heritage. It’s not toally MÖRK BORG or anything but I ended up writing myself a summary of the rules.

I played this in half hour bites over a few weeks. I answered about 30-35 prompts in total, writing only a few sentences each.

Unferth’s story is very difficult to summarise now, because Unferth himself forgot most of it, and his name. I didn’t write quite enough detail, but I’ll put some stuff down here.

Unferth was born in Sweden in an 800-900CE-ish time. He was the second son of a minor Jarl, had a girlfriend, and hadn’t been on his first major raid yet. A stranger calling himself Woden came to the feast-hall when Unferth was in charge and lured him into the dark and Turned him.

Unferth then spent a little while accidentally wrecking his family due to temper issues and being a vampire that can’t go outside. He became a vikingr and went to England to have his pick of the bodies and loot, before settling in Danelaw. He had a familiar run a shop in Winchester and preyed on vulnerable people.

He changed his name to Danewulf, then shortly later forgot his original name as he wrote it in a Diary that was stolen by his undead brother. He fled and started his life again as a shepherd, finding love with a sheperdess and forswearing human blood. The sheep blood made him bucolic and slow. When she died of old age he came back to society, rediscovered himself and made a figurative killing during the first great plague.

However as the 1200s rolled around a man called Karl holding a Diary claiming to be Unferth’s came around. He was a servant of his brother, but saw more profit in being a double agent. This seemed like a great deal to Unferth, who happily paid for a spy network in London keeping an eye on his brother. Until it turned out it was all lies, and the money was going nowhere. He killed Karl in his fury.

Unfortunately, Karl was expecting that, and used his own forbidden knowledge to use his slaying to uncage a gestalt of harvested souls and became the Leviathan that walked the Earth, killing all it came across.

Danewulf of course wasn’t too fussed by this and kept back on in his life. When the Sun was blotted out this made his life easier in fact, and things started to improve!

Skills can only be used (checked) once.

Resources can used as long as you have them. If you put memories in a Diary, don’t lose it (Danewulf lost it).

Despite the frequent suggestions in the book that I could perform my own research on adding historical accuracy, I did not do this. To me that would be the thing that I’d use as an excuse to not write things, so my history was pretty vague, and then deviated rapidly with the Leviathan.

I would definitely do it like this again, took the pressure off very well. The disadvantage was that the times were all a bit vague and in the end I only passed about 300 years of game time.

On the other hand, it’s not a fucking competition to live the longest. I got a lot of high rolls too, although the Leviathan came from landing on the same page three times, and things get a little more extreme when you go down the prompt list for each page. It just said forbidden knowledge and I’d thought “oops maybe I shouldn’t have assumed I could kill that Character” but then I liked the idea of everything going a bit off the rails.

This would be a lot easier to play on index cards (as the book suggests), but this felt a bit wasteful so instead I just used half an A5 page per Memory and some whole pages for listing Characters, Resources, Marks, and Skills. It’s a bit more of a pfaff, counting the number of spare Experiences I had, but not the end of the world (unlike the game lol)

Yes, in a shock to nobody, I would play this again. Managing which Memories to keep and which to lose is indeed taxing but not enough to stop this being a nice end-of-the-day winding down game. But with vampires and plague and death.