Tried having a quick game of The Quiet Year due to a last minute cancellation in a regular game. I normally like planning ahead, even a “no prep” game, so this is a big deal for me. Can I actually just set up a game and go?

Player: Is this game dark and miserable?

Me: No, someone told me they played as meerkats in a zoo. It’s as light or as dark as you want.

I used the roll20 module again, as this is its strength, the deck and rules are already in there. I read out the start and brough up the relevant handouts and turn order, and dropped the map in. While my players were getting a handle on what they wanted to play, I edited the decks of the cards, as I wanted something less than two hours rather than the maximum four that it normally plays as.

I deleted six cards from Spring, Autumn, and Winter, and removed the whole Summer deck. It’s almost too short at this point, but I was pretty tired when we finished (2330 localtime, I normally play late) so it was bang on in that sense.

I also needed to create Contempt cards and Construction tokens again - I just used a token with 6HP rather than a rollable table. On the whole this is easier to create and easier to change. I did this while other players were taking their turns.

The story of a penguin colony on an ice-encrusted land (or big iceberg, we didn’t really define it). It starts with an Abundance of water, and Scarcities of Food and Hand Cannons. And a scary portal is found on the north east of the map, which requires chanting and praying in front of.

The colony (south-west larger blue blob) rapidly polarise on whether to just open the bloody thing. Eventually they schism into two colonies, after leaders of the “pro-portal” and “anti-portal” sects keep ending up dead.

Meanwhile a saloon is built to the west and a prison to the east, using wood recovered (via red, uh, harness-thing) from the discovered shipwreck in the north west. And then, as the disease-wracked penguin colonies prepare to do war upon each other (note the constructed invasion fleet/triangles), an infected outsider visits, and teaches a way of peace. Guns are set aside, and the colony starts to unite, just as the Frost Shepherds arrive. 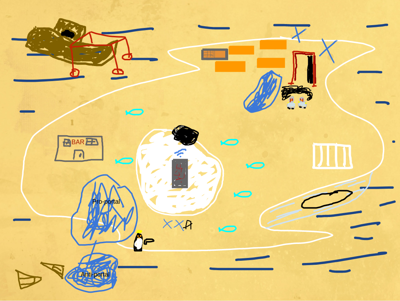 See, I told you it was short. The white blob in the middle is a mountain. The fish are from when it rained fish. I can’t remember why that happened.

The infection cards were a bit dark this game, the plague made the penguins' eyes bleed. We all sat and thought for a second after I said that. So, on an unrelated note: if you’re seeking a distraction from COVID-19, I suggest deleting the following cards:

The problem with a “backup game” or “emergency game” is you don’t really then have a session zero to check boundaries. I’m playing with the same players, but my regular AiME group doesn’t really risk introducing pandemic as a concept.