AAR: Blood for the blood god

The Quiet Year is a sort-of-coop map-drawing and story-telling game. You use a deck of cards (special printed deck or there’s a lookup table for a normal playing card deck) to draw events, and use them to tell a story. I say sort-of-coop, in that it’s more like Roman consuls where each day/month it would swap who was “in charge” rather than agree or compromise on a single coherent course of action. In fact you’re explicitly not supposed to actually talk through each event together and agree it. You draw on the map the result of each event to build a recording of the story, and you can start building projects to fix the problems beset by your tiny community.

An old piece of machinery is discovered, broken but perhaps repairable. What is it? What would it be useful for?

As the seasons turn towards Winter, they get darker:

The weakest among you dies. Who’s to blame for their death?

There are other better reviews, and I don’t really want to do that here. Although I suppose this is a small review of the roll20 module that I used.

The game took 3.5 hours over two sessions, including explaining how to play. It is beautifully simple like that.

Two of us used roll20 and Discord for voice

From the rules, you’re required to read this verbatim.

For a long time, we were at war with The Jackals. Now, finally, we’ve driven them off, and we’re left with this: a year of relative peace. One quiet year, with which to build our community up and learn again how to work together. Come Winter, the Frost Shepherds will arrive and we might not survive the encounter. This is when the game will end. But we don’t know about that yet. What we know is that right now, in this moment, there is an opportunity to build something.

But what actually happened? Well, we defined a landscape with a Marsh of Death, a Valley of Plenty, the Sands of Time, and the Unsea. And then put our community on a sea-side cliff-top, mining the sands (of which they had an Abundance) and decided they had Scarcities of Security, Warmth, and Dragonshards.

Well, the community tried to fix their up their scarcities, and ichor from the Swamp of Death leaking into the drinking water from the Valley of Plenty. This kept going wrong in quiet predictable ways, and was a fun “distraction” from the statue that was found in the Sands of Time.

The statue looks creepy, and little accidents kept happening round it, like birds dying. But the blood of the birds would vanish. Over time the statue changed colour from concrete grey to a red tint. People would worship it in the night.

This actually went pretty well, for a while. But then the Parish, the region’s church that was previously worshipped, got mad and kicked off. And a challenging Fire God appeared to the south. This was great as Winter started as the fruit trees kept providing there and the water was warm for bathing, and the town started to move down. The Blood God grew wrathful and smote down the palisade wall (I don’t know why we kept building one, it got destroyed 3 times).

The town turned on its Blood God and fought it back as a group, it withered and died with no sacrifices. It was planned to be set in a burning boat at sea, but the Frost Shepherds arrived and people were too busy for such trifling matters. 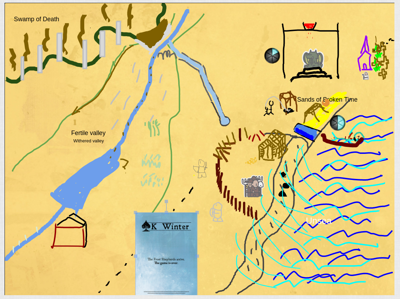 Roll20 doesn’t export, so here’s a screenshot, with final card

I like TQY. I’ve listened to a few APs of it on PartyOfOne and Farrier’s Bellows, and towards the end of the latter they point out that you’re pretty much supposed to be silent when it’s not your turn. That makes for a crap podcast so I can see why it doesn’t happen.

We consciously tried to play like that this time, but over Discord I think you still need to voice encouragement, as you can’t do it through body language.

While the game is supposed to bed without much discussion, I think there is some benefit in discussing before you start, the setting:

And actually some kind of Session Zero “What things are we not going to do?”. This I think means you’re all thinking along the same lines when you get going.

We haven’t really used contempt tokens much – drawing one on roll20 doesn’t have the same eye-fucking opportunities as flouncing over to the pot and taking one on an actual table. Maybe a roll20 sound-effect of a gasp would help here, or murmuring in court?

The roll20 module however, I am not impressed with. To break it down, you get for your $9:

What you don’t get:

I’d like to thank the 2MTT Discord (specifically Bazz) for pointing me for the right words to fix this on roll20. Basically I’m looking for some Powered by the Apocalypse style counters, and that community have a solution, summarised here:

An Isle of Lore token for my construction

The backup solution for my construction projects was a monster with 6HP and a health bar for it. This is prettier. Although a health bar, on reflection, was much easier to update, you can enter “-1” in each token to drop its value.

For the contempt tokens I create a deck of a single card and there’s an option to keep generating through the table when people draw. The cards need a front and a back otherwise they can’t be removed from your hand, it seems.

Again, this would be great if the roll20 module for playing this game did these things for me.

However on whole, roll20 works well. There’s some nice drawing tools we can use together, it’s nice having text and different colours to hand, and the ability to zoom in for drawing something small. If we want to move a drawing of a monster/house we can do that (although not terribly easily). Possibly my favourite bit was that we drew up the initial landscape, and then I moved it all to the map layer so we couldn’t muck it up with more drawing. Also COLOURS! That helps things looks nice.

Finally a GM-less prep-free game? That’s a nice change. Well aside from the roll20 prep, but that’s hopefully non-recurring engineering.