I’ve been running the Dark Veil arc for my players, which unfortunately seems to have gone offline (both the publisher and any products off DriveThru RPG) and the players have to sneak onto a ship full of pirates and then bring them to justice. As I was going through the campaign notes the ship seemed cramped and the likelihood that fights between decks could occur and then everyone will start misremembering what a certain stack of dice corresponds to for height and it would get a bit of a muddle.

“How hard can it be to make a ship?” I thought. Well, with a laser cutter, it’s about a day’s work – about half that if you don’t bother painting it. 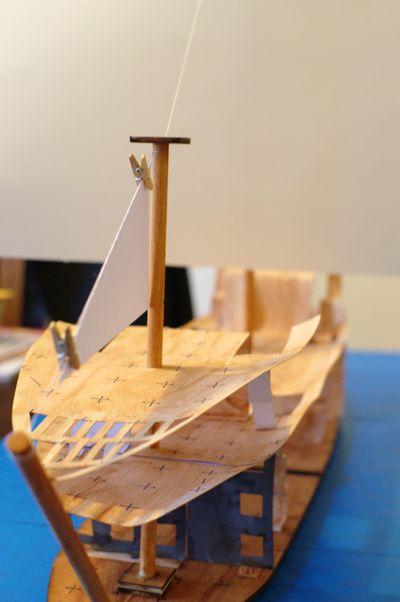 I was going to write the guide here and then link from thingiverse, and then decided to separate into instructions, and info. The instructions are there, and the SVG files needed as well. Suffice it to say, laser cut everything, the wood takes about 20 minutes on the tiny one I have access to, and the card takes about 15 for considerably more. If you don’t paint it, you can probably assemble it in a few hours – painting and drying takes a few more, and I found the paint I used made the card curl.

I put a tactical grid on it, and have ruled that any square that doesn’t have four corners marked is difficult terrain – you can squeeze yourself onto it, but it’s not a natural fit. I added some rigging and sails the largest of which instantly got in the way so I couldn’t see the board when we played, so make it removable!

I’m glad I did it, the players responded very well, and roleplayed more. Well, they got more inventive in trying to kill things in combat at least. Pushing enemies down stairs, off one deck onto another. The terrain of a ship I have decreed, is so full of ropes, one can make a DC 10+5n roll to cut a rope and the resulting release of tension will propel a character up a mast or swing from one end to the other. n increments throughout the encounter as players use the terrain ability – an extended rest is needed to reset it. I haven’t decided what happens on a fail yet, should the rope not be cut, or perhaps the wrong rope is cut and the sail falls down?

Of course, none of this answers why I mention a kraken in the title. The answer is of course I made a kraken to attack the ship. It’s a sock (yes, I have green socks) folded back to make a half-sock and then filled with newspaper. Green chenille pipe cleaners are tentacles, and I added googly eyes. It didn’t look mean enough so it got eyebrows as well. Elapsed making time, about 5m. Trying to take the level 20 Kraken from the monster Compendium down to level 6 was more of a challenge. In the end, as with any Solo monster I’ve used, I fretted about it being too hard and then the party pretty much rolled over it. But everyone had fun.

Now my only problem is thinking of nautical adventures to have with the boat – this might derail the Dark Veil campaign! 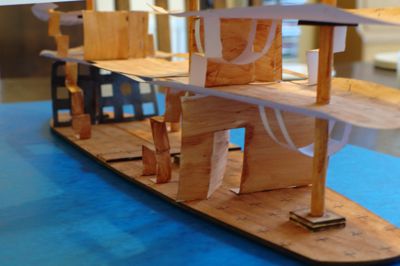 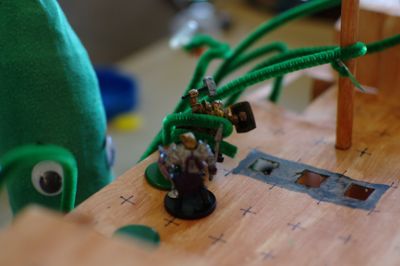 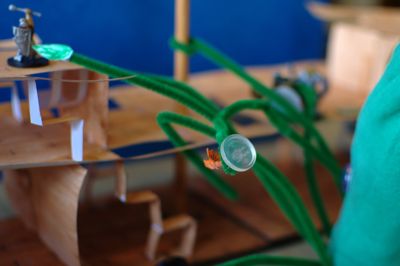 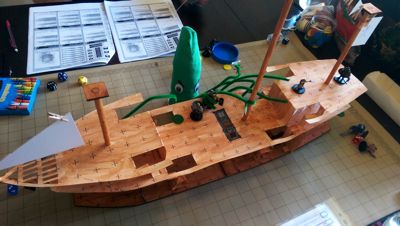